Chinese is one of the oldest writing systems still in use, the earliest known form of Chinese writing were a well-developed character system carved on turtle shells, animal bones or bronzes. Later, this character system slowly evolved from a highly pictorial form into line form, and from different variants into a standardized and unified characters that we see today. The evolution of such can be attributed to those who were seeking to create a convenient form of written characters for daily usage throughout the ancient empire thousands of years ago.

This is the Chinese character evolution for horse. As you can see, the pictogram progressively lost their pictorial flavour during the evolution. The first character shows an animal that has a head, a big eye, mane, limbs, heels and tail. Later, the head and mane combined to form the top half of the character, the limbs, heels and tail combined to form the rest, which evolved further to dots and a curved hook. The last is the simplified Chinese we see today.

Pictograms and ideograms are the two earliest types of Chinese characters used since more than three thousand years ago. However, these two types of characters lack of precision in the terminology for new inventions and discoveries due to the civilization development. Associative and pictophonetic compounds were then invented with the combination of two or more pictograms or ideograms from the existing system as the supplementary, which improved the terminology accuracy.

This pictogram depicted a woman who is kneeling down to sit back on her heels with both hands overlapped in front of a plump chest. Notice that later development changed the character drastically. Combine the two pictograms of woman and horse to form a pictophonetic compound that means mother, which refers to a woman where the character has a pronunciation similar to the Chinese character of horse.

A character that shows a polite bow illustrates a person, since politeness is a behaviour that is only for human being. In the ancient times people also bending forward to work such as farmers transplanting while working in a paddy field.
These two characters are intuitive. In Chinese, yáng is a generic term that refers to many species in caprinae such as goats and sheep.

Pictograms mainly used to represent specific things that are tangible. Therefore, we need ideograms for those abstract concepts, this small category has indicative characters that are direct iconic symbols.

A suitable number of strokes indicate some low numerals. Line is used as a measurement to represent position by an iconic indication.

Combination of two or more pictogram or ideogram characters construct associative compounds, it suggests a new meaning based on the original meaning from each character.

The character shǒu resembles five fingers when you stretch out a hand. If you put it above both your eyes, it is a typical looking gesture. Unlike the pictophonetic compounds, the associative compound pronunciation neither same to any of the two characters.
The line and dashes of the character shuǐ looks like water stream and splash. It is written as when the radical is situated on the left of a compound character, such as combine with character mù to represent teardrop.

Combine the water radical with character yáng, which is related to water and pronounce similar to the Chinese character of goat.

The chart below shows that this is by far the largest group. 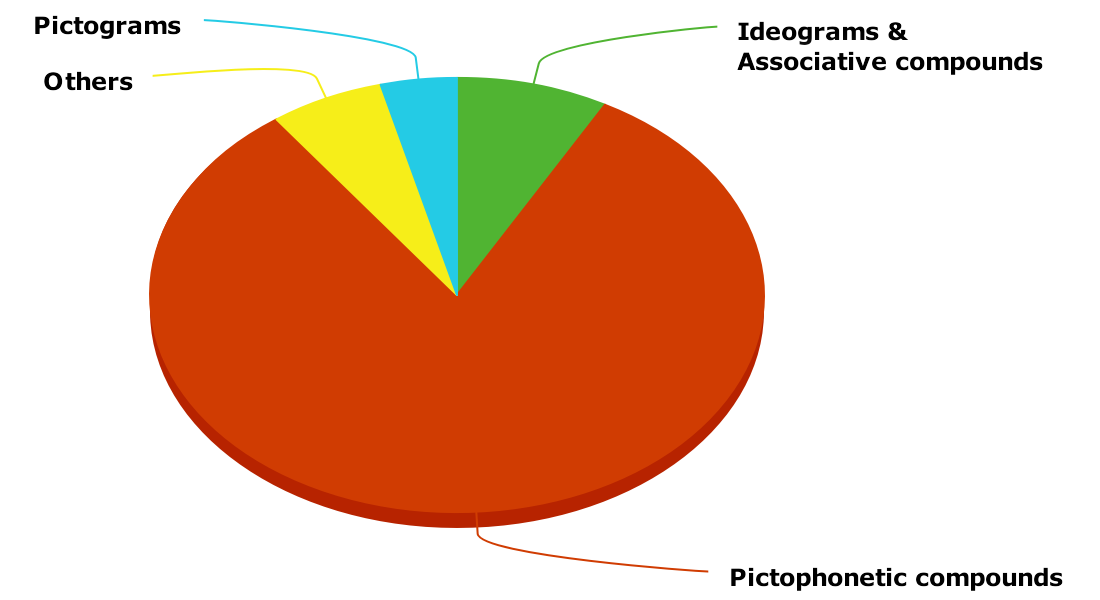 Chinese characters are square-shaped characters. It looks very complicated if you treat each Chinese character as a whole, it will be very difficult to read, write and remember. In fact, Chinese characters' composition has its regular pattern. It becomes easy to remember if you divide it to different character-components, where each part is a relatively small unit.

Combine two rén together that looks like a person follows behind another person, add a third person then we have a crowd. Character rén is a pictogram, but it can also be a character-component for other characters. In this case, it helps to recognize three different characters by knowing only a single character-component.

Most of the Chinese characters have two to three components, there are nearly 70% of the components have fixed name and meaning.

Chinese characters are symbol system used to write Chinese, they are constructed by various types of strokes combined. Stroke is the smallest structural unit of the Chinese characters, which includes basic strokes and compound strokes.

Compound strokes are two or more basic strokes combined. Below are some examples:

As described earlier, there are regular patterns to form Chinese characters. Most characters such as associative compounds and pictophonetic compounds formed by two or more pictograms or ideograms. Therefore, we can break them into various components based on how they are structured, this helps to memorize the character based on the meaning and pronunciation from each part.


All of the three characters above have two strokes, which are piě (leftward) and nà (rightward), but the strokes have different lenghts and are connected differently.


Character dà looked like a person with open arms, character tài and tiān add a diǎn (dot) and a héng (horizontal) respectively on top the character dà, these give you two different meanings. By grouping them together, we can learn all these characters easily using the compare-and-contrast method.